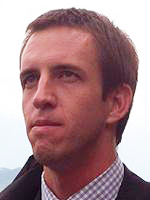 Rows: 15, Columns: 15 Words: 70, Blocks: 28 Missing: none – this is a pangram. This is puzzle # 15 for Mr. Wentz. NYT links: Across Lite PDF
Peter Wentz notes:
This was one of those rare themeless puzzles where my construction and seed entries began at the center rather than at 1-Across. I ... read more

This was one of those rare themeless puzzles where my construction and seed entries began at the center rather than at 1-Across. I fondly recall ZOLAESQUE from "Wordplay", and partly inspired by that, found KAFKAESQUE could fit nicely among other fun phrases and went from there. The grid is a little closed-off, which allowed me to first insert the marquee central answers and then attack the quadrant of corners individually. The NW corner was actually the last filled, and much of that time was spent trying to find a solid entry at 3-Down that could also support quality entries around it. A little bit of research led to VELVET ROPE, whose clue I wish I could take credit for.

For the last year or two, I've been focusing on attempting to create perfect Patrick Berry-style (BERRYESQUE?) grids free of clutter, and while for this one I'm happy with every entry of six letters or longer, those few ORKs, TETs, and KEAs still irk me. Thankfully they're not terribly obscure, but not ideal. That staircase of S's also isn't the best, but they all end common phrases without awkward or contrived plurals, so I can more than live with the result.

Overall though, I am very happy with how this puzzle turned out! There's definitely a joy in creating something lots of people will hopefully enjoy, but there's also no harm in always striving to do better. Makes for even better crosswords down the line, which benefits everyone!

Jeff Chen notes:
Pete Wentz! One of the younger constructors whose themelesses I always look forward to. I know I can expect several fresh, new entries ... read more

Pete Wentz! One of the younger constructors whose themelesses I always look forward to. I know I can expect several fresh, new entries and a clean puzzle when I see Peter's byline. What I particularly like about his WENTZIAN puzzles is that his vibe is almost always contemporary without feeling forced.

For example, look at the beautiful VELVET ROPE: new entry which evokes the image of a bouncer moving the rope back and forth at an upscale club. Beautiful entry. And the clue, even better! It took me a long time to figure out that it wasn't referring to the queue of people but the actual line of the VELVET ROPE. Beautiful stuff.

Another up-to-date entry came in the sneakiest of ways. [Alternative to cords] and BLUE????? led me to plunk down BLUETOOTH, the cordless protocol between smartphones and their accessories, etc. Pretty impressive to lay down the relatively BB KING and LIES ON to draw you right into the trap of thinking about Bluetooth.

The SW did give me slight pause, as I have very high expectations out of Pete's work, similar to what I go through with Patrick Berry, Josh Knapp, Doug Peterson, Brad Wilbur, David Quarfoot, Kevin Der, Ian Livengood, and Mike Nothnagel's (among others) work. TOO TOO feels like an outdated term, and right above THE ASP from Little Orphan Annie made it feel especially old. It would be one thing if THE ASP was a classic character, but I only know him through constructing. The ????SP is awfully constricting, after all — really no other options for that pattern. So I went back to figure out Peter's dilemma, and it could not have been easy. Getting KATE MOSS and KINESCOPE are well-worth plunking down, but it forces THE ASP. And once that goes in, not many other better options are available in that SW.

Check out the beauty that is POPE LEO X. LEO I, LEO X, etc. have been used so much in crosswords, but to get the full POPE LEO X is pretty awesome. Hard to believe that in all the time the crossword has been around, Pete has the honor of debuting the entry. POPE LEO and POPE LEO XI have both been used in the NYT, but not this important POPE LEO X and his role in the historic events around Martin Luther.

I usually don't notice excessive use of plurals, but I did pick up on that diagonal row of S's from MCS to KITTENS and beyond. Tough, wide-open section to fill in the middle and Pete has some great stuff in there, using his 7's wisely (FAT CATS crossing KITTENS!) but all the S's are a slight tick.

Finally, what beautiful cluing today. My favorite is the repurposed [High beams] which makes you think about cars and their high beams. But no, they're literally high beams = rafters. Ingenious.

The grid uses every letter. It's a pangram.