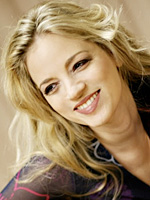 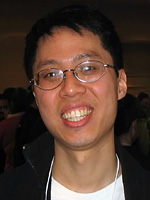 See Wordplay for Will Shortz's comments.

Constructor notes:
joon: Back in late November, Amanda emailed me with the idea she had of having a crossword be a part of her wedding reception since a ... read more

joon: Back in late November, Amanda emailed me with the idea she had of having a crossword be a part of her wedding reception since a crossword had played a key role in her engagement back at the Westchester tournament in September. She had the AB theme idea already, and just needed help putting a grid together (she also wanted to write the clues). We went back and forth a few times about the best way to hide the two names (Easter egg #1, you might call it); I had mentioned that the least constrained way was to just include a message in the first letters of the clues, but breaking up the names into chunks (as we ended up doing) or hiding them along diagonals could also possibly work.

One of the other things we had discussed in the early exchanges was payment; normally I would charge for a job like this, especially one on relatively short notice (the turnaround time was about two weeks), but I thought this was a special case. I was pleased to be a part of it, so I just asked Amanda if she could donate / make a donation to a charity of her choice instead. When she told me that she wanted to donate to pancreatic cancer research, because she had just lost her dad to pancreatic cancer, I thought that it would be a lovely way to honor him at the wedding. But then the wheels kept spinning, and Amanda knew she wanted to use the hidden message in the clues to remember her dad, leaving me to hide the names in the grid.

At a very late stage, I asked Amanda if we should put any hint anywhere that might nudge wedding guests (who were mostly not crossword addicts) to find the message hidden in the clues, but she said 1) she thought Brian Cimmet or Will Shortz — the crosswordiest guests at the wedding—would notice; and 2) if nobody noticed, she would reveal it herself and thus set up a toast to her dad. My only regret about this whole experience is that I wasn't there in person for that toast! It must have been quite a moment.

AMANDA: Not to be outdone by my now husband who proposed to me via a New York Times crossword, this cruciverbalist bride wanted to make her own special puzzle for the wedding. I immediately came up with the AB POSITIVE theme based on our first initials. I then made a list of about 20 possible themers of varying lengths. In addition, I was determined to hide our names somewhere in the grid, as well as somehow create an attribution to my father who passed away over the summer — more on that last part in a bit.

Given the constraints (not to mention the time-sensitivity), I enlisted my friend and genius constructor Joon Pahk, who agreed to help me actualize my lofty idea. He would make the grid, and I would do the cluing. His first grid contained theme answers I wasn't wild about (ARMY BRAT, ALL BETTER), so I had the nerve to ask him to redo it, as I had my heart set on more sparkly fill like AURORA BOREALIS and AWESOME BLOSSOM. Joon generously obliged and then showed me where he had hidden our names, which leads me to how the published puzzle is a little different than the one we had at the wedding.

At the reception, guests were all given a copy of the puzzle at their seats, but Will also let me borrow one of the big whiteboards for the event. As guests completed their grids, I invited them to come up and fill something in because doesn't every recreational solver want to feel like a finalist at a crossword tournament, even if just for a moment? As for the puzzle itself, I gave it a title on the page: "Marriage is as easy as...see?" and a hint: "When read in order, the answers to the starred clues will reveal the ultimate 60−across." (Those starred clues are 16-across, 36-across, 65-across, and 68-across.) During the party, I cryptically told Will (yes, Will Shortz was at my wedding!) that I was counting on him for something, but he'd have to figure out what it was. He nodded, grinned, and accepted my challenge. (None of my five test solvers had grokked this last layer, so I deemed it best to offer the prompt, even to the puzzle master himself). When the big board was completed I talked about the puzzle, the theme, the title, and our names, much to everyone's delight. And then I asked if anyone found anything else worth noting. Will raised his hand and addressed the crowd explaining that what he found was the difference between a good puzzle and an amazing puzzle. He rightly discovered that I had coded the clues acrostic style, meaning that reading the first letter of each clue in order would reveal a message. I won't spoil that bit here, but now you know where to find it. It was my stealthy way of making sure my dad was at my wedding after all.

Jeff Chen notes:
Blood donation is near and dear to my heart (ha). On those days where I feel like I can't do anything right (there are many), at the ... read more

Blood donation is near and dear to my heart (ha). On those days where I feel like I can't do anything right (there are many), at the very least, I'm a red cell-producing vessel (see what I did there?) good for six units per year. Blood types as crossword fill make me smile more than they should, and blood themes often pump (sorry, not sorry) me up.

Matt Gaffney did a blood type puzzle a few years ago that was brilliant. I had been on the fence about his meta-contest series until then, and it hooked me. If you're not a subscriber, you're losing out on incredible fun (and mostly delightful head-desking).

Initialism puzzles aren't my thing, given how overdone they've become in crosswords. Using rare letters (JQXZ) can redeem them somewhat, or a fantastic revealer, or some other layer of creativity. A + B gives a ton of options, though.

So many danger spots – TREO / COLOMBO, AMBIEN / RIAL, STYNE / OTT, OCASIO / CTU. That last one is particularly problematic, exemplifying why Will Shortz is so against not-that-well-known initialisms. If you watch "24," Counter Terrorist Unit might be obvious. If not, better call Jack Bauer. Perhaps that's meant to be meta!

joon sent me a note about this puzzle a few days ago (before Amanda did), and I pretended to sagely understand it, like I had instantly figured out what he meant. Roughly eighty-eleven hours later, I recalled that puzzle Amanda mentioned. Ah! Amanda and Brendan, it all made sense.

Okay, I had to ask joon. There are some neat elements:

Overall, reading joon's note (and his explicit explanation after I failed to figure things out!) made me appreciate the puzzle more than before.

Answer summary: 6 unique to this puzzle, 1 unique to Shortz Era but used previously.

These 34 answer words are not legal Scrabble™ entries, which sometimes means they are interesting: