Puzzles for May, 2022
with Jim Horne comments

In his comments, Jeff links to a site called Rhyme Zone to find rhymes for attaché. XWord Info can also find rhymes. We use the same data source that Rhyme Zone does. Here's our list of attaché rhymes. Why duplicate their information? It's part of our ongoing drive to provide maximum value for constructors.

Rhyme Zone is part of the OneLook family. OneLook data knows a lot about words — what they mean, how they're used, how they're pronounced. This blog post shows how you can, for example, find words that match a pattern within a particular topic, or find phrases that include a specified word. XWord Info knows a lot about crosswords — which words are useful or dangerous, how words have been clued, etc. We aim to combine those two knowledge sets.

For example, our attaché rhymes are color-coded (key below chart) so you can see which words have been used in modern NYT crosswords, which ones have only been used in pre-Shortz puzzles, which come from Jeff's database but have never been used in a NYT puzzle, and which come only from a dictionary. Clicking words that have NYT history shows all the clues for that word. Other words link to definitions.

A quick primer on Search vs OneLook Search

Our two main search buttons labeled Search and OneLook search are useful for different reasons. For pattern matches, it's often a good idea to click both.

Importantly for constructors, both result sets can be sorted by NYT usage frequency, word length, or by Jeff's word score.

Note that you may have to click More OneLook... to see advanced features like synonyms, antonyms, rhymes, triggers (other words that tend to occur with your word), and words that precede or follow yours.

Seattle traditions are dying. It used to be that every time you were seated at any restaurant here, a waiter would bring ice water and hot sourdough bread to the table before you could even order. No more.

Seventh-inning stretches at Mariners games meant singing Take Me Out to the Ballgame and then (41-Across) Louie Louie, a catchy tune that no two people can agree what the lyrics are. It was great. That 32-year-old tradition ended this year. Now it's some Macklemore song. Bah!

Oh, the puzzle? I loved it.

You probably know the so-called "Curse of Disneyland." If you even once hear the song It's a Small World After All, you can never, ever get it out of your head.

The new Disney curse is We Don't Talk About Bruno. If you're not already infected, DO NOT watch the video in Jeff's notes.

I liked this one more than Jeff did. The concept is genius, the execution is brilliant. I wish I'd thought of it.

Jim here, sitting in for Jeff Chen who's on assignment. 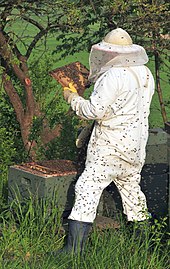 "Kids and their parents" is a terrific way to start a crossword, and it shows the psychological power of selecting the perfect clue words. If the clue were just "Kids" you might guess GOATS right away. The seemingly helpful "parents" addition tricks you into looking for a slang word for families. One of the keys to solving well is the ability to quickly discard assumptions. "Drink that comes with a buzz cut" is another example. It's not an alcoholic drink (did you go there first?) and the cut is to the caffeine buzz, not the head locks. Oh, and just in case your parsing skills are as bad as mine, the answer is DECAF LATTE, not DECA FLATTE, which is an obscure S.I. unit for, uh, flatness or something.

On the other hand, I don't think "That's ___ business" at 57-Down is a misdirection. I don't get why that's a clever clue for YOUR. (This is why Jeff is the usual commentator.)

Today's theme is a solid Tuesday idea. SPELL BOUND is accomplished phonetically from the starts of the other theme answers. Does it bug you that all but one "letter" is a complete word?

I found the puzzle tough for a Tuesday thanks to my ignorance of college basketball coaches and Italian rhyme schemes. (Ottava rima goes ABABABCC in iambs. You knew that already.)

Finally, it's Stanley Cup playoff time, and I take extreme umbrage at the clearly incorrect clue for REFS at 69-Across. Refs don't call offsides, linesmen do! Shortz is such an idiot. Oh, wait, there are sports other than hockey that have offsides? Nevermind. Sorry I brought it up.

PS. It's been a long time since I've been a crossword commentator and I've completely forgotten how this works. Jeff is back tomorrow. Go Kraken! (Next year.)

Jim here, sitting in for Jeff Chen, who is testifying before the Jan. 6 committee.

Another great start with an outstanding clue at 1-Across. "Rolls dough" isn't a verb. It's the do-re-mi you need to finance your Rolls Royce. I know, I know, you paid cash for yours.

That aside, today's clear star is "Nipple ring" at 2-Down. AREOLA is a popular answer going back to the 1940s thanks to its useful combination of letters, but cluing has been handled delicately. "Interstice on an insect's wing" isn't fooling anyone. Last August, for the first time in the NYT, the protective reticence got punctured with "Spot for some piercings." Today's clue ups the ante a bit more. Can other useful (but crappy) words like ANUS and ENEMA be far behind?

Some solvers will be offended by a nipple reference. Others will be relieved to see the NYT dial back its prudishness and acknowledge the existence of a body part we all have. Editors have to carefully balance competing concerns. They don't always get it right.

It's impossible to be objective about crosswords because they tie together whatever topics happen to work. Some of those topics will resonate with you, some will annoy you, some will confuse you; it depends on your background and interests. I saw an IBSEN play a couple of weeks ago. Jules and Jim is one of my favorite films. Today's crossword won my heart before I was halfway through it. This personal aspect is why I find it difficult to say whether a puzzle is good or bad, only if I enjoyed it. It's also what makes crosswords unique among puzzles and why they're such great fodder for bloggers.

Jeff's back tomorrow, and if you've been following his lack of POW picks this week, it's apparently with a crossword he admires.

On our Finder page, you can enter **CAST** and click OneLook search to find phrases with the word cast.

Jim here. sitting in for Jeff who's getting his mustache waxed.

CATFISHES is already a decent answer, but it's an interesting editorial choice to clue it as a verb since the slang sense it points to is creepy. It doesn't mean pretending to be a Nigerian prince to get your SSN, it means preying on the vulnerable lovelorn by faking romance, with the ultimate goal of, well, let's leave it at just financial gain. It's an evocative term. It's new. It's an important concept in modern digital life. It's today's 1-Across.

Lots to love today. My themeless endorphin levels vary with the clue cleverness, and there are some good ones here: "Follower of many state names" for EDU, and "Modern-day scroll" for TWITTER FEED stand out.

OPEN MATTE is obscure enough that it gets a dictionary clue, but it's sandwiched between two good answers with outstanding clues: "Where to find 55 and over" for RADIO DIAL, and "Parents obsessed with play dates" for STAGE MOMS.

SALOME would have to be considered a tragedy, at least for John the Baptist whose head gets served on a platter to the spoiled title character after she strips to the famous Dance of the Seven Veils. That's how it goes in Strauss's opera version anyway, and also in the play, and I'm guessing also in that old book from which the Herod v John story derives. Sex and violence. Two staples of both opera and the Bible.

Crosswords are full of conventions you just have to learn. One is that clues like "They're used during film production and promotion" can be puns. Those are different kinds of TRAILERS but having the same name is good enough for crosswords. Too much logic will spoil your fun.

Another convention you need to internalize is the occasional focus on spelling rather than meaning, like "What makes Dr. Dre?" for ANE, or "Aisle's head" for SILENT A. Today we have "Myanmar has two" for EMS. As you solve more crosswords, your reaction to these will go from "So unfair!" to "Damn, I got fooled again!" to "Yeah, totally saw that coming. Next."

Oh, and Mr. Distenfeld, your resplendent constructor notes are amazeballs.

Jim here, sitting in for Jeff who is rewinding his overdue Blockbuster tapes. 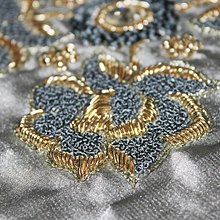 When I worked there, the style guide had a complicated section on the question of whether to include periods. It involved the length of the abbreviation and whether it was an acronym (pronounced as a single word like LASER) or an initialism (spelled out like A.S.A.P.) The oddest example (now finally abandoned) was that IBM had to be I.B.M., even though the official company name was IBM and the letters officially no longer stood for anything. Traditions evolve slowly.

PASTA SAUCE on bow ties is an amusing image. Obvious misdirects can still be humorous.

Saturday puzzles often include a category of clues I call "Fun facts you don't actually have to know." If you're not familiar with zardozi embroidery, the clue asking where to find it (48-Down) feels impossible. But it's probably a country name. Four letters, so that narrows it down. 47-Across gives you the starting I, so that leaves two options. Zardozi sounds, what? Persian maybe? IRAN is more likely than IRAQ anyway, so in it goes. Who was the British poet-laureate in 1668 (two years after the Great London Fire)? Who knows, but it's a better clue than "old-timey British poet you've heard of that fits the squares." Similarly, let's imagine you're the type of person unfamiliar with the exact percentage of the world's wood various companies use, but 1% is a lot, and that points to an easy answer. There. I've gone from complete ignorance of three important clue elements to learning three interesting facts.

Stacked grid spanners go in and out of style, and today we get three outstanding answer phrases dead center. The long answers throughout are excellent. Bravo.

An historic performance of The Anvil Chorus from Il Trovatore: