Puzzles for March, 2015
with Guest comments

Graphic grids tend to lend themselves to left-right symmetry for obvious reasons. I particularly like how PI appears to be bursting through a wall, à la Kool-Aid Man, though this makes for a more septate grid.

I count five variations on a theme of PI:

Packing in so many thematic layers is an impressive feat. I love how vibrant many of the answers are, and they are all well within the common parlance. I'm looking at you, ROTTEN EGG, MAD HATTER, GUILT TRIPS, UTOPIA.

James Mulhern, you had me at LOBSTER BIB. Some see it as the most dignity-destroying accessory ever invented; I prefer to see it as a harbinger of deliciousness. Mr. Lagerfeld agrees.

The eastern hemisphere of this puzzle slid into place smoothly, thanks to the scaffolding of ERIC BANA, THE INSIDER, and BAHA MEN. I like the flow around the center black blocks — a nice balance between fluidity and structure. Despite my lobster love and Kendrick LAMAR admiration, the NW corner was the last to fall for me. I went down a blind alley with RES instead of REO, and ANIMANIACS was slow to emerge from the deep vaults of my brain.

REO means nothing to me without a Speedwagon in tow, but it turns out that it's the same REO of Diamond Reo Trucks. REO stands for Random Eli Olds, the founder of Oldsmobile. What a fantastic 19th-century name! I love it. Random's father was named Pliny Fiske Olds, which is also just grand, and Random married a woman named Metta Ursula Woodward, who later inspired NBA player Ron Artest to change his name to Metta World Peace (allegedly).

Hanging my head in shame, I was forced to turn in my Hoosier credentials this week, never having heard of A HOOSIER HOLIDAY. A very sad day indeed. I assuaged my chagrin by watching The Shot five times in a row. Nobody stopped the clock!

A triple stack of triple stacks, with narrow throughways between. The top section was a brambly brawl for me, between the aforementioned Dreiser reference and my shallow familiarity with the Rolling Stones. Weren't we all raised by toothless, bearded hags? (Just kidding, my mom is actually too beautiful for her own good.) I liked a lot of the down answers in that section, both for scrabbliness and for liveliness: ISUZU, JEEP, CHO, KORAN, HYMN. NISAN and POA were new to me, as was ITEA, the other plant genus in this grid.

The middle and bottom triple stacks came together more easily, but looking over the finished grid, I admire the top stack more. It sparks more, to my eye. Besides, ORANGE POPSICLES were never my favorite — grape all the way!

What a beautiful theme! I love revisiting a seminal work of art, especially one with a controversial past. Duchamp's own brothers requested that he withdraw his painting from its debut exhibition in Paris, arguing that it was disrespectful to depict the nude form so mechanistically, engaged in such a humdrum activity as walking down a staircase. The Cubists felt it was not Cubist enough. And no one liked the title, which was seen as not sufficiently literary. 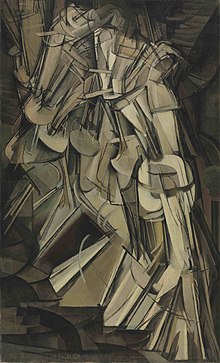 With a twenty-first century gaze, it's difficult to imagine why anyone would have ever considered this 1912 work shocking or even surprising. So here's my billion-dollar idea: glasses that allow one to see a work of art as it would have been seen at its debut, so that its groundbreakingness can be appreciated anew. Put on the glasses, and you temporarily have the cognitive history and experience of a Parisian in 1912, so that when you look at Duchamp (or Manet or Picasso or Giotto), you feel the "what IS this?" frisson, accompanied by delight or repugnance or confusion. The Apple version is the iEye (dibs on the trademark).

Right, back to the puzzle! The staircase architecture and circled letters tightly constrain the grid, necessitating several tricky little cul-de-sacs. I liked the inclusion of ARMORY SHOW and AVANT-GARDE, as well as the H2O/RED NO. 2 crossing. The southwest corner was a quagmire for me, with ambiguous cluing and the trickiest of the cul-de-sacs. Those are minor nits to pick, though. The theme just delighted me thoroughly.