Puzzles for September, 2014
with Will Shortz comments

The published puzzle today looks quite different from what the constructor sent me. Allan had the theme answers running vertically, which I didn't see any reason for. So I switched the Acrosses and Downs, so the main theme entries would read the usual way. A couple of corners were polished, too. The thing I probably like most about this puzzle is the bonus, "explainer" theme entry, TAMES, at 30D, crossing the "M" of DELI MEATS. A very elegant touch.

I'm very impressed with Ethan's clues. Most of these are his. Lots of good ones, but my favorites are 10D, 12D (I did not know that!), 32D and 38D. I also like 64A, which is a tricky answer to handle. When I consider submissions, I pretty much ignore the constructors' clues, which I know I can revise myself, if necessary. But I do give some preference to contributors (like Ethan) who I know write good clues, and I tend to publish their puzzles more quickly after acceptance.

This puzzle reminds me of a supposed "themeless" crossword that Will Weng once ran, in which each of the long answers contained a synonym for "rear end." After publication, when the hidden theme was pointed out to him, the proper-minded Weng embarrassedly expressed regret about publishing it. I wonder what he would have thought about today's theme?!

– puzzle by Peter A. Collins

I have a feeling today's puzzle won't be liked by some of the crossword bloggers, as the grid's vocabulary isn't the most scintillating, and it has a lot of three-letter words. Still, the fill is solid, and 17A, 38A, 25D, 26D and 43D are quite nice, so to me this is worthy. Most of all, the gimmick with the black squares is just ... wow!

Anytime a puzzle contains triply-checked letters, like the circled ones here, there are likely to be compromises in the fill. The middle section of this grid has more unappealing entries than I like — especially CES, SDS, NLERS, ALAI, ASTA, SNO, and DAL. So the question becomes ... is the "aha" strong enough to outweigh the puzzle's weaknesses? In this case, obviously, I thought the answer was yes.

One tricky answer to clue here was BAD GIRL (34A), as almost any clue could be seen as sexist. BAD GIRL has a negative connotation that BAD BOY does not, which seems unfair. The clue I ended up with, "Biker chick, perhaps," was my attempt to be neutral — which I think it is.

Andrea's original manuscript had her own name, ANDREA, at 13A. While I don't mind inside jokes in constructors' puzzles, they shouldn't detract from the fill — which, unfortunately, is what happened here. The corner also came with E LEE, RLS and ERLE. The revised corner is much cleaner. 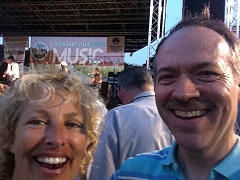 As is the case with many of Andrea's puzzles, this one is pangrammatic. I don't give a hoot about pangrams, which I don't think most solvers notice. At the same time, I don't mind them, as long as the fill doesn't suffer. The rare letters J, Q, X and Z can spice things up. In this puzzle all four of the rarest letters have been squeezed into the upper-right and lower-left corners, with the only real casualty being the unappealing ISE at 62A. Otherwise, nice. So this pangram's fine.

BTW, Andrea visited me a couple of months ago, and we saw Ian Hunter (formerly of Mott the Hoople, one of my favorite old bands) at a local music festival. I'm sure she and I were the only people among the thousands at the outdoor concert trying to make a crossword theme together!

Today's puzzle, along with those for Monday, Wednesday and Thursday this week, were used last Saturday at the 7th annual Bay Area Crossword Tournament, in Oakland, Calif. The event was run by Andrew Laurence to benefit the Families of Spinal Muscular Atrophy.

Years ago my friend Evie Eysenburg, one of the New York Times crossword testers, was at Bloomingdale's buying something. The clerk had to call the credit department to verify Evie's information. For clarification the clerk spelled Evie's last name "E as in 'eye," Y as in 'you,' "S as in 'sea' ..." — which left the person in the credit department going "Wha-a-a-at??!" She and I have been laughing about this ever since.

After I told this story to Joel, he and I tried to think of a name in which every letter could have a confusing "clarification." He cleverly turned the result into a Thursday theme.

Should a theme come with or without a revealer? To me it depends on the puzzle. Sometimes a revealer entry — one that explains what or where the puzzle's theme is — is needed for clarity. In this puzzle, though, you're on your own. You just have to notice that the starting words in the five longest Across answers are related. If you do, you get a nice aha.

Like almost all puzzles that contain triply-checked letters, like the shaded ones here, this puzzle includes some vocabulary that is not as crisp or clean as in puzzles with regular checking. That's just the nature of the beast. I thought this puzzle's theme was cool enough to justify the AAR, the LLD'S, the SSE, the ENS, etc. The grid really doesn't have anything awful, and overall it's about as clean as it can be given the constraints.

I accepted this puzzle only recently, but decided to run it quickly because of the recent death of 15D. Not that it mattered, but the puzzle just felt more timely this way. I love the quad-stacks besides, some of the best work on this sort I've yet seen.