This web browser is not supported. Use Chrome, Edge, Safari, or Firefox for best results.
XWord Info Home Colorize 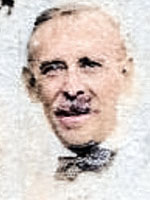 Charles Erlenkotter constructed the first-ever crossword in the Times, published on February 15, 1942. At that time, he was a veteran constructor, having been published in outlets as early as 1924 and frequently after that.

As a young man, he ran his family's printing business after his father, the proprietor, died in 1897. He later joined the Hamburg American Line, a German-owned shipping company, where he spent most of his career. He would go on to work in various locales for the company, including San Francisco, St. Louis, and Montreal. During World War I, the company's operations were limited, and Charles instead worked for the New York Conservation Commission as a forester.

After the war, he resumed work with the Hamburg American Line. He and Mina moved to Montreal, and he managed the company's office there.

By 1924 he had begun constructing crosswords. That year, he was published in the Tribune syndicate.

In 1939, the outbreak of World War II interrupted the Hamburg American Line's business again. Charles left the company and he and Mina moved back to New York, settling in the Bronx. There he focused on puzzles. In the 1940s, besides the Times, he was active with such publications as Stars and Stripes and the newspaper PM, which later became the New York Star. He was also an editor of Simon & Schuster puzzle books.