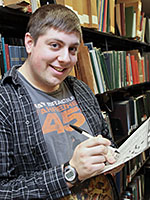 Rows: 15, Columns: 14 Words: 69, Blocks: 34 Missing: {JKZ} Spans: 2 This is puzzle # 3 for Mr. Mahnken. NYT links: Across Lite PDF
Evan Mahnken notes:
I just had my graduation ceremony for my Master of Arts in Teaching program yesterday, so what better way to celebrate than ... read more

I just had my graduation ceremony for my Master of Arts in Teaching program yesterday, so what better way to celebrate than having my third crossword in the New York Times! FINGERS CROSSED that things go well in my first year as a Chemistry teacher. This one goes out to everyone who helped me make it this far.

Jeff Chen of xwordinfo.com likes to mention Crucivera, the God of Crosswords, who sometimes deigns to smile on a puzzle and grant it perfect symmetry of theme answers. Not this puzzle. For this puzzle, Crucivera beat me up and took my lunch money. Crossing themes are difficult to grid because of all the letters locked into place, and this one was no exception.

It took me a few iterations to get it right — thanks to Will and the team for their patience. While there are a couple of compromises in the fill (especially the SW corner), here's hoping that the bonuses and the theme are enough to make up for it. Here's hoping you enjoy the solve!

Jeff Chen notes:
My favorite part of the crossweek is comparing notes with Jim. Our exchange on today's: JC: What, no THUMB? JH: ... read more

My favorite part of the crossweek is comparing notes with Jim. Our exchange on today's:

JH: Technically, the thumb isn't a finger. It's a digit.

JC: So if I asked you, how many fingers do I have, what would you say?

JC: That's probably why almost everyone in the world uses a base 8 counting system, then?

JH: Eight bits in a byte? You use a computer, don't you?

JC: Of course, although—

I explored this FINGERS CROSSED theme concept many moons ago, dropping it because I couldn't figure out a way to get every finger crossed into a chain of five (NOT FOUR!) themers. Not within the framework of some form of symmetry, at least.

Interesting to see Evan's execution — I hadn't considered leaving out the THUMB, or throwing caution to the wind and placing themers wherever they'd fit. It's not elegant, but it works. Mostly.

Maybe it works better if you think about people with janky fingers? Rock climbers sometimes break their ring fingers, leaving skewed digits as a result?

Let's go with that.

I did enjoy a lot of the bonuses, fun to encounter LADIES ONLY, LIQUIDATED, PARENTHOOD, the evocative UV EXPOSURE.

So many liabilities, unfortunately. AS FAR and IT'S SO take up so much precious space. ESQS ESTA GEES LEM RETD WEI — none are terrible, but as a whole, it's far from elegant. It's tough — the themer layout dictates the low word count, and there's no simple way to make the construction easier. You can't break up UV EXPOSURE, for instance, since PRICE INDEX would be affected.

I'm 90% positive that a symmetrical layout would be possible if you separate FINGERS / CROSSED into 7 / 7. That would allow for great flexibility in squeezing those two revealer words into whatever symmetrical locations you could find.

Man, Evan made me laugh so hard with his Crucivera joke. She can be a big bully, that she can.

I don't recall that conversation, but I'm sure Jeff wouldn't lie.

Answer summary: 4 unique to this puzzle.

There are 15 rows and 14 columns, with 0 circles, 0 rebus squares, and 2 cheater squares (marked with "+" in the colorized grid below.)