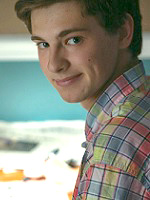 Rows: 15, Columns: 15 Words: 76, Blocks: 37 Missing: {KQ} This is puzzle # 11 for Mr. Vratsanos. This is puzzle # 8 for Mr. Ezersky. NYT links: Across Lite PDF
Constructor notes:
ALEX: Our original version of this puzzle had a very different theme arrangement: it was not NAME CALLING but CALLING TIME, and the ... read more

ALEX: Our original version of this puzzle had a very different theme arrangement: it was not NAME CALLING but CALLING TIME, and the revealer was not PAIRS OF CARDS but HOUSE OF CARDS. Moreover, the revealer was not positioned well, as it was the second of the six themers. Eventually, I realized that the revealer basically had to be moved to the end, and I was a little daunted by that because of it being 12 letters. Still, I set my mind to it, and Sam seemed to like it a lot when I showed it to him.

After filling and cluing this new version and running it by some friends, we sent it to Will in June 2013. He replied just one month later, saying he liked the theme but HOUSE OF CARDS did not really explain it. Additionally, he asked us to rework some of the fill, and we tried to go above and beyond his instructions to make the puzzle better before sending him our revisions on August 21 of that year. Indeed, he said it "turned out pretty nicely" when he replied on August 29.

Thank you, Sam, for being such a great friend. We can't thank you enough, Will, for everything you've done for this and all our puzzles … and we hope you enjoy our puzzle!

SAM: I would not be writing NYT-caliber puzzles if it wasn't for Alex. This is more than just a compliment to him, his kindness, and his constructing abilities … it's the honest truth. Here I was, a naive 16-year-old, eager to get involved in my newfound passion of crossword construction. I had prowled the Cruciverb-L mailing list for months at this point, wondering what it would take for me to finally step up and take puzzling to the next level. Sure enough, Alex, whose name I recognized from his delightful June debut, posted a thread asking for construction help on an ambitious puzzle he was designing. I hastily wrote him an email, addressing him as "Mr. Vratsanos," feeling inferior … and he responded almost immediately, welcoming me into the so-called "Crossworld," and praising a few of my ideas. I was given a shot like never before, and it meant the world to me.

Although that particular construction effort rapidly failed, the rest is history. Alex introduced me to my future mentor, Vic Fleming, and between the both of them, I learned to stand on two legs, which was an unfamiliar feeling to me at my age. This is my eighth puzzle in the NYT, and I currently publish a new puzzle every week on my blog, The Grid Kid. This whole puzzling nature has become a regular thing for me, but what you've solved today is different than any other puzzle I've ever made. This was more than just a puzzle; this was an opportunity.

Jeff Chen notes:
Two of crossword's young guns team up for a two-fer today, theme answers which contain two words, each of which can precede CARD. This ... read more

Two of crossword's young guns team up for a two-fer today, theme answers which contain two words, each of which can precede CARD. This type of "both words can precede" theme sometimes results in tortured-sounding themers — it's a tough constraint to work with — so it's a good sign that I didn't pick up the gimmick until the very end. CREDIT REPORT, HOLE PUNCH, NAME CALLING, TRADING POST, and HIGH SCORE are all fairly colorful entries. I also enjoyed getting a younger vibe to the puzzle, executed in a manner accessible to not just Alex and Sam's generation. VIP ROOM is great fill, and although it's something I'd doubtful ever get access to in real life, it was immediately understandable. CADDY clued as the nickname for Cadillac was nice, too. And ["Oh puh-leeze!" facial expression] for EYEROLL made me long for the (good) OLD DAYS. (In a good way, I promise.)

It was a curious SMASH-UP of cool entries like BIG PAPI and ones that didn't quite hit home for me. DO IT NOW felt a bit contrived, and the outdated ROZ / RAZR felt like something us 40-somethings would put into a puzzle. ACEY is something I usually try to avoid because it can really only be clued in one way. And in a puzzle about cards, it threw me off, making me wonder if it was part of the theme somehow.

Speaking of that, although I liked the implied phrases of CREDIT (card), PUNCH (card), CALLING (card), etc., I found it odd that HOLE (card) and HIGH (card) were related to the revealer, while the others were not. Felt like there was untapped potential somehow, perhaps to use those in a way so the puzzle ended with a bigger bang than PAIR OF CARDS, which sounds like a dictionary definition.

Overall, a good amount of nice material on a tough construction. As Alex mentioned, ending with a 12-letter entry creates all sorts of difficulties. I particularly liked the creativity in where they placed PAIRS OF CARDS; unusual.

These 40 answer words are not legal Scrabble™ entries, which sometimes means they are interesting: