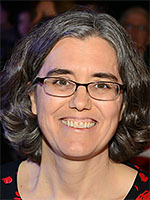 I suppose we might all consider ourselves part of the Strategic Homeland Intervention, Enforcement and Logistics Division right now. A crazed 28-ACROSS screaming, "All right, people are dying. It is your job to save their lives" would sort of fit right in. I'm deeply grateful for all the medical professionals and first responders who don't need 28-ACROSS to tell them this. It might help the rest of us to realize that her message is at least as much for us: If you're not doing something that people need to subsist, just stay home. That's our job. That and whatever other job we're trying to do from home (assuming we're lucky enough to have such a job).

I'll never be nearly as put-together as 45-ACROSS, but I'll do my best to look presentable when, coincidentally, I connect with my students by video for the first time on the day this puzzle is published. (Shout out to all the students, teachers, and school administrators who are learning so much so quickly about how to teach and learn in unfamiliar circumstances.)

And, finally, a bit of advice for our times from 17-ACROSS: "Have regular hours for work and play; make each day both useful and pleasant, and prove that you understand the worth of time by employing it well."

I am always grateful for spring.

Jim: I didn't get the "pun" aspect of SPRING ROLL. Did you?

Jeff: ROLL sounds like ROLE. Role, as in a part to play!

Jim: That's not how puns work. They'd have included "homophonic" or "phonetic" in the clue.

Jim: Maybe not in the vast lawlessness of the American Colonies. In Canada, every schoolboy is dutifully required to study and memorize "The Primer for Prim Punditry."

Jim: Rule #1 of Punditry: Thou Shalt Not Phoneticate. Rule #2: Honor Thy Groans. Truly, the punniness today comes in the form of "roll" used in the "roll call" sense.

Jeff: Whoa. Who are you, who are so wise in the ways of science?

Brilliant theme concept, SPRING ROLL hinting at calling the roll of SPRING-related roles. One of the March women in Little Women, April something, someone named MAY from a show that was so terrible even this superhero fanboy averted his eyes, and JUNE CLEAVER, my secret boyhood crush.

Both Jim and I had a tough time with this solve, both of us having serious gaps in our knowledge of fictional characters. I was relieved to hear that Jim couldn't recall MARMEE MARCH. I'm not the only uncivilized boor — take that, Canadia!

And get this. Jim only barely recognized JUNE CLEAVER. Score one for the American educational system!

Point is, the theme concept was WITTy (Wish I Thought of That). It's fraught with danger, though, since name-heavy puzzles are alienating enough when you're using celebs. Going one level deeper into fictional characters ... some solvers will squee over them, and some will be haters because WTF CROSSWORD, I HAVE TO KNOW GREY'S ANATOMY CHARACTERS? Perilous territory.

A quick fix that could have helped a ton: replace MELINDA MAY with AUNT MAY from the Spider-man movies. Solvers are forced to come up with one less potentially arbitrary-seeming name, and even better, the gridwork becomes about four times easier. A central 7 is so easy to build around that it'd be easy to reduce the count of ABAT AGA AME MGR PEI plural EMMAS.

Better yet (but more invasive) would be to break up SPRING / ROLL, placing them in a corner, intersecting at the R. Maybe even change it to ROLE, for better comedic effect! (Quiet, you Canadians.)

Point is, I loved the theme concept, and would have jumped at a chance to take this one to the next level. If Laura could have found more accessible names and pulled off a smoother grid, it would have been an easy POW! choice.

Answer summary: 6 unique to this puzzle, 1 unique to Shortz Era but used previously.

There are 15 rows and 16 columns, with 0 circles, 0 rebus squares, and 6 cheater squares (marked with "+" in the colorized grid below.)

These 34 answer words are not legal Scrabble™ entries, which sometimes means they are interesting: