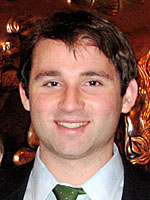 Rows: 21, Columns: 21 Words: 140, Blocks: 79 Missing: {X} Spans: 2 This is puzzle # 37 for Mr. Livengood. Jeff Chen's Puzzle of the Week pick. NYT links: Across Lite PDF
Notepad: When this puzzle is done, the circled letters, reading counterclockwise from the top, will spell a phrase relating to the puzzle's theme.
Ian Livengood notes:
I saw a clue for AHA and — wait for it — the light went on in my head. The AHA MOMENT spelled out as a light bulb was the next logical step, followed by THOMAS EDISON and ... read more

I saw a clue for AHA and — wait for it — the light went on in my head. The AHA MOMENT spelled out as a light bulb was the next logical step, followed by THOMAS EDISON and INCANDESCENT LIGHT BULB (a 21!). I toyed with listing other Edison inventions or accomplishments, but a quote seemed more appropriate.

The construction was tricky since I couldn't have the themers running through the middle of the grid mucking up the circled answers. But aside from two or three short clunkers, I'm pleased with the fill. I paused at inserting DNA MOLECULE and OPEN CIRCUIT since they seemed too close to the Edison/electricity/science theme, but eventually decided to roll with 'em.

Jeff Chen notes:
Beautiful puzzle today, everything I personally like to see in a Sunday-size grid: nice theme answers, strong, clean fill, and a visual element. Plus, an inspirational message! Often, I ... read more

Beautiful puzzle today, everything I personally like to see in a Sunday-size grid: nice theme answers, strong, clean fill, and a visual element. Plus, an inspirational message! Often, I get a little worn-out by a 21x21 crossword puzzle, but this one kept me delighted from start to end. Doesn't hurt that I just saw Ian at the ACPT and had a drink with him, really enjoying chatting about crossword construction as always. Nothing better than talking shop with fellow constructors.

Except if Will is paying, of course.

One aspect I thought Ian did very well was in capturing elements of many different types of puzzles. Quote puzzles by themselves tend to be on the dull side (unless the quote is spectacularly funny or insightful), but not only does Ian restrict the quote part to three entries, he ties it in with the puzzle's visual. I had to work to uncover the quote, and it was totally worth it.

It's also neat when a constructor's personality and interests shine through. Ian is a sports guy, so seeing beautiful long entries like NFC SOUTH, CHICAGO BULLS, and my hometown THE NINERS was a pleasure. Some may accuse him of making the long fill too sports-oriented, but it's not like he's used TOLEDO MUDHENS or the TACOMA RAINIERS. Come on, it's THE NINERS, people! Grumble grumble, stupid play calling / decision making at the end of last year's NFC championship game, grumble grumble.

It did take me a little while to figure out the AHA MOMENT running around the light bulb, because I skipped the notepad (those just tend to seem superfluous) and tried to read it from the lower left corner going clockwise. It's the natural thing to do, right? Getting an OMAHA TNE wasn't quite doing it for me though, so I begrudgingly went back and read the notepad. Fine, I'll follow directions!

As with all of Ian's stuff, the fill is so smooth. He's the one who got me on a kick against partials, especially five-letter ones. It's amazing how much good stuff he packed in while avoiding ugly stuff, just some short NNE, CIR, ADE, SOC, ULT, OLEO kind of filler, barely noticable (I had to go back and search it out). I totally agree with his use of cheater squares in the middle row of the puzzle (before SEAL and after IDOS), which I'm sure made those sections smoother. That section above SEAL (where FEDORAS is) I'm sure would have been crunchier if not for that cheater square.

There are 21 rows and 21 columns, with 9 circles, 0 rebus squares, and 8 cheater squares (marked with "+" in the colorized grid below.)

These 60 answer words are not legal Scrabble™ entries, which sometimes means they are interesting: