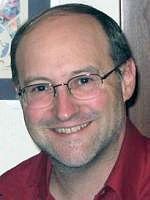 Once again, I'm thrilled to be published in the NY Times, my 5th puzzle.

DAIRY GODMOTHER was the seed; my original clue — which made my family laugh — was "She might make you a cheesecake you can't refuse." The clue was changed by Will, keeping it one hop away from the original phrase instead of two.

My first idea for a clue for SCIENCE DICTION was "Exceptional quality of Sir Patrick Stewart's Captain Picard," but you'd might have had to be a Trekkie to get it; I think Will's Stephen Hawking clue works quite well.

The first few versions of the puzzle — there were over 20 — had a 7th theme answer stretching across the middle row, but I found that it made everything too crowded and led to very weak fill (and something like 24 3-letter words). It was clued "Lament of the Best-in-Show runners-up at Westminster" with the answer: WE HAVEN'T THE DOGGIEST. Pity I couldn't fit it in since coincidentally the puzzle appears the same week as the Dog Show. Thanks to XWordinfo, it has seen the light of day.

Jeff Chen notes:
Themers today are phrases with their F's changed to D's, thus giving 'passing grades.' At just 134 words and six themers, this is another one in Will's experiment of mashing up a ... read more

Themers today are phrases with their F's changed to D's, thus giving "passing grades." At just 134 words and six themers, this is another one in Will's experiment of mashing up a Sunday-size puzzle with a themeless. It's hard enough to create a Sunday-size puzzle with 140 words, and SO much harder to reduce to even 138 words. Get down to 136, and you have to be a grid ninja in order to pull it off. 134... there are few Sunday puzzles in Will's tenure that have achieved this level. Super hard to do.

The theme itself is pretty entertaining — "wacky" phrases are often going to be hit or miss depending on one's sense of humor. DAIRY GODMOTHER amused me (especially with Yaakov's original clue!), as did SCIENCE DICTION, but the rest I was plus/minus on. It seemed to me with a simple letter swap, there could be many more humorous options. And TWO DIVES FOR A TEN felt like it was an outlier, in that this poor themer still failed, with its F. I would have preferred all F's changed to D's, but I don't think it's a huge deal; there's no law against it. I'm sure some people will get their knickers in a bunch about this supposed travesty though. Mrrrrrow! (That's supposed to be the sound of a hissy-fit)

More notable to me today was the longer fill. Great use of the longest slots, BED OF ROSES being particularly nice. Even the unexpected COMO ESTA (apparently it's used in more formal situations, whereas COMO ESTAS is more informal) was really nice to uncover. Add in LOVE NEST, BLONDE ALE, and ORANGE OIL and you have some great stuff.

I wonder if sticking to 136 or even 138 words would have been better though, as some of the longer slots had so much more potential. LEFT SIDES feels pretty arbitrary, LOOSE TEA doesn't seem nearly as nice to me as LOOSELEAF TEA, and JILTERS could have been so much more. Makes me wonder what could have been if LOOSE TEA had been broken at the S, or JILTERS was broken in half (and their respective sections refilled).

Finally, my favorite clue gives an insider's nod to crosswords: "Iglu and yoghurt, e.g." for VARIANTS. Here's to you, EMEER and TIPI!

I appreciate the experimentation; it's an important way to try pushing the boundaries. I think I still want either more themers or more clever wordplay-type clues in my Sunday puzzles, but the variety allows me to better clarify and understand my own tastes.

These 67 answer words are not legal Scrabble™ entries, which sometimes means they are interesting: