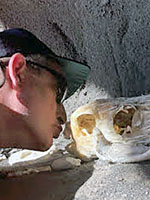 Rows: 21, Columns: 21 Words: 140, Blocks: 68 Missing: {QX} This is puzzle # 41 for Mr. Ginsberg. NYT links: Across Lite PDF
Matt Ginsberg notes:
My last puzzle in the Times came with a very brief interval between submission and publication of 74 days. This one was nearer the other end of the spectrum, with the interval being 833 ... read more

My last puzzle in the Times came with a very brief interval between submission and publication of 74 days. This one was nearer the other end of the spectrum, with the interval being 833 days, a bit over two years. (Still, not really so bad!) I'm not sure if it's related, but many more of the clues were changed on this one than on most of my efforts. Some of the clues I included but which never made it into print: [Deserted?] for SERE, [Crime recommended by the Doors in 1967?] for ARSON, [Gabriel Macht and Patrick Adams, as seen on TV] for SUITS, [Pigpen-esque] for MESSY, and [They're in knots] for TOADS. I used Maximum Decimus Meridius instead of Spartacus in 101-A (SLAVE), because I'm a Gladiator fan, and included the bit of trivia [Teddy Roosevelt's was the smallest when he assumed office] for AGE. I used [Burning it doesn't change the name] for ASH and had [Gathers, as Timothy] for HAYS because my wife is an equestrian. Will also saved me by removing a bunch of clunkers.

Cluing is interesting. I've remarked elsewhere that Dr.Fill does better on the NY Times puzzles than it does on those in the ACPT, and I suspect that the cluing is a lot of the reason. Dr.Fill is pretty well dialed in on the cluing style in the Times, but Will edits the ACPT clues much more lightly, and that's why I suspect it has trouble. Speaking of which, you can find a video of Dr.Fill solving today's puzzle below:

This was an interesting one. DF does terribly on its initial pass, but then checks to see if this is a rebus puzzle and concludes that it is (right!) with the rebus AD (also right!). It resolves the puzzle, and does much better. The only mistake is that it thinks that TEENY is better than WEENY for [Itsy-bitsy] and can't figure out what's going on with the existing clue for 103-D. My clue for WEENY was [Diminutive], about the same as Will's; my clue for WINE was [Red or white, but not blue]. DF would probably have liked that clue much better (it knows all about red and white wines), so I'll view this as another of Will's unending and gleeful efforts to cause Dr.Fill fits.

Jeff Chen notes:
A Tale of Two Puzzles today. Interesting twist to a rebus theme, ADs getting zapped in the across direction to form wacky phrases. And it was fun to search for those little AD squares, ... read more A Tale of Two Puzzles today. Interesting twist to a rebus theme, ADs getting zapped in the across direction to form wacky phrases. And it was fun to search for those little AD squares, each one a miniature a-ha moment when I uncovered it.

I'm not totally sure I got it, though. Why was the AD zapped in one direction only? And am I using that "ad zapping" term correctly? I did a search for "ad zapping" and got quite a mixture of results. It also felt awkward to have an extra AD that wasn't zapped in the across direction … at 1-Across, right at the very front. I wondered for the longest time if that was supposed to be a hint to the entire puzzle somehow.

Strong choices for themers, both getting snappy base phrases like FIVE O CLOCK SHADOW (something we rarely see because at 16 letters, it doesn't fit into most weekday grids) as well as resulting answers. BRO MINDED gave me a chuckle, exactly the way a kooky-themed puzzle should kick off.

But other longish fill includes ARISTOS, BARDED, EDESSA. Perhaps a case can be made for EDESSA, I suppose, as it has historical significance. I'm curious who uses the words ARISTOS and BARDED. Bueller?

Some brilliant clues to make the short fill really stand out. I kept a running list because there were so many ones that brought a smile to my face. I think it's worth going back through these entries to appreciate how fun their clues were: FIN, PINS, PAROLE, IDOL, COCAS, RNA, MEAL. And the clue for TASS might confuse some, but once you realize it's referring to ITAR-TASS, the old Russian news agency, it sings. I'm usually satisfied if I get three or four of these playful clues in an entire Sunday puzzle, so to get eight blows me away. Very well done.

Yet other short answers were tough, of the type that potentially turns non-addicts away from crosswords. SERE is ranked so low on my word list that I only can access it when I'm in truly desperate measures. OSO is near that level, as is the extended BRRR. It's funny how strongly just a couple of those types of entries can affect a person's experience (subjective, of course). Will recently mentioned SLA and SDI are entries he's very strongly discouraging as near "puzzle-killers," and I feel like there are a few more that could be added to that list.

Overall, I enjoyed the experience, a hunting expedition for those AD squares lurking in the grid (in the down direction, at least), and making the leap that the ADs had to be zapped in the across. As with most Sunday puzzles, some compromises in the eternal quest to bring out the best of times. Dickensian, indeed. (Although Will says he's not purposefully trying to fool Dr. Fill at the ACPT, I love the image Matt paints of Will twirling his Snidely Whiplash mustache as he plots a la Uriah Heep.)

NYT puzzles often reference Apple products so it's nice to see two Microsoft Office clues today — 76A and 99A.

Answer summary: 15 unique to this puzzle, 1 unique to Shortz Era but used previously.

There are 21 rows and 21 columns, with 0 circles, 9 rebus squares, and no cheater squares.

This puzzle has 15 unique answer words.

These 59 answer words are not legal Scrabble™ entries, which sometimes means they are interesting: