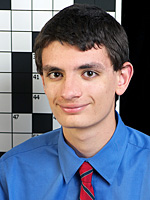 Rows: 21, Columns: 21 Words: 140, Blocks: 69 Missing: {Q} This is puzzle # 12 for Mr. Vratsanos. NYT links: Across Lite PDF
Alex Vratsanos notes:
Of all my puzzles to date, this is probably the one on which I spent the most time. The original concept goes back to May 2012, inspired by a Mike Nothnagel Thursday that had appeared two ... read more

Of all my puzzles to date, this is probably the one on which I spent the most time. The original concept goes back to May 2012, inspired by a Mike Nothnagel Thursday that had appeared two years before. I went through several drafts before realizing that the first and last themers would fit in between the four-letter key words, all of which I had clued as [****]. Along the way, I received feedback from quite a few fellow puzzlers, which definitely made the final product better.

With the good fortune of seeing this puzzle published on the Thanksgiving weekend, I would like to express my gratitude to all of my friends and colleagues in the cruciverbal community. I hope that you enjoyed solving "Four-Letter Words" as much as I enjoyed making it!

Jeff Chen notes:
Nice idea, taking four words and combining them in different pairs to form longer words. All the cross-referenced clues got tiring for me during the solve, but I did like how rigorous Alex ... read more

Nice idea, taking four words and combining them in different pairs to form longer words. All the cross-referenced clues got tiring for me during the solve, but I did like how rigorous Alex was, using a logical sequence of combining keywords 1&2, then following with the order 1&3, 1&4, 2&3, 2&4, 3&4. The engineer in me likes when things are structured.

I wish all of the combinations had resulted in colorful entries. HEAD SHOT is a great phrase, as is LONG SHOT. HEADLONG isn't bad. But OVERLONG is not something I commonly see, and OVERHEAD and OVERSHOT are just neutral in my book.

I also wish the themers had been stronger. I know some solvers don't mind "dictionary definitions" in their grids, but seeing EXPENSE TYPE is pretty boring to me (and I work in finance!). WENT TOO FAR is much better in my eyes, since it's a phrase I hear in conversation. NOT A GOOD BET, similarly. YEARBOOK PHOTOGRAPH is so close … but YEARBOOK PICTURE or YEARBOOK PHOTO sound so much more natural to my ear.

Not an easy layout, what with the six themers and the four key words in the corners. So I appreciate that Alex worked in some good long fill, the AUTOBOT / SKELETOR pair my favorite (says a lot about my immaturity). I thought CHILI DOG was great too.

As will happen with tougher layouts, some long fill felt a bit wonky to me. I enjoyed learning about PEARLFISH, but this huge Samuel L. Jackson fan couldn't recall EVES BAYOU to save his life. I'll have to go watch it. AGEMATES and ILL-KEPT (unkempt?) also fell flat for me. Just personal opinion.

A friend of mine mentioned that Will asked her to reduce the number of short (3-5 letter) answers in her Sunday grid, and I wondered why that was. Today, I can see it. With so much short stuff around the perimeter, it felt to me like the puzzle was stuffed with filler material. Granted, starting with some gluey stuff in OOX, SMEE, COCAS, ETUI probably accentuated the effect, but there was such a bolus of short material around the entire perimeter that it was hard to ignore.

Answer summary: 11 unique to this puzzle, 3 unique to Shortz Era but used previously.

These 55 answer words are not legal Scrabble™ entries, which sometimes means they are interesting: