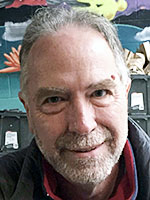 Rows: 21, Columns: 21 Words: 136, Blocks: 68 Missing: {JQZ} This is the debut puzzle for Mr. Crowe. NYT links: Across Lite PDF
Richard Crowe notes:
Constructing crossword puzzles is very new to me. I find the creative but constraint-driven process of working out themes absorbing, the creation of fill frustrating and a bit of a slog, ... read more

Constructing crossword puzzles is very new to me. I find the creative but constraint-driven process of working out themes absorbing, the creation of fill frustrating and a bit of a slog, and clue writing great fun. For this puzzle, theme answer ideas were easy to come up with, but tying them to a profession not always so. I wish I could have included WHY THE HELL NOT with Atheist as its clue.

When I write clues, it's simple enough to get a sense of difficulty level for individual answers, but I don't feel particularly adept at sensing how hard a puzzle is, as a whole. Or, maybe I just like to write nasty clues. For this puzzle, I think the editors felt the clues had to be pulled back a bit. For example, they added the word "bowling" to the clue for 7-Down, thereby saving the solver from mistakenly filling in HOV. Darn!

Jeff Chen notes:
I'm going to go to a local museum just so I can ask the docent HOWS IT HANGING. Tee hee! Similarly, I'm not much of a baseball fan, but I'm going to work on my swing, so I can ... read more

I'm going to go to a local museum just so I can ask the docent HOWS IT HANGING. Tee hee!

Similarly, I'm not much of a baseball fan, but I'm going to work on my swing, so I can innocently say ANYBODY HOME to the ump as I jog past home plate.

Morbidly amusing to think about a CDC worker pointing to an Ebola victim, asking (in a Steven Wright deadpan), WHATS EATING HIM?

WHOS CRYING NOW, on the other hand, is not funny. It's abhorrent. There are two little kids in my house, Richard! TWO LITTLE KIDS CRYING AT BEDTIME, THAT'S WHO'S CRYING!

(There may be some personal bias in that last paragraph.)

I wasn't as keen on IS THAT A FACT, as it seems a bit too close to something you'd actually ask a copy editor. But overall, there was a lot of humor in these themers.

A decent grid, especially considering 1) it's a debut and 2) it's a Sunday 136-word puzzle. Those two shouldn't generally go together, as the sub-140 grid isn't for the faint of heart. I liked some of the bonus fill, like FARMHOUSE, AIRBRUSH, IT'S A DEAL.

LITTERBOX and WET WILLY with their graphic clues, not as much. I appreciate the humor in the [… latest poop] clue, but being a cat owner, reminders of dingleberries aren't welcome. And did we need to get the over-descriptive "moistened finger" in the WET WILLY clue?

Speaking of cringing, that GARY / GLI cross. Yikes! It'd have been passable if GARY had been easier. But CARY and MARY both seemed reasonable (CLI or MLI instead of GLI, why not?), so it felt like a guess. With quite a bit of AMF ANOS EADS ECOL SSR etc., I don't think the 136-word effort was successful. Could have been a much cleaner and colorful grid by going up to 140 words. Shifting and adding black squares to break up ORIENTATE would be one area I'd have targeted.

Grid issues aside, I appreciated the humor in this theme.