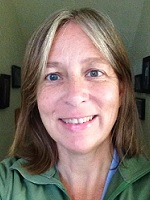 What a great story, PLINY THE ELDER looking up at erupting MOUNT VESUVIUS, saying FORTUNE / FAVORS / THE BOLD. 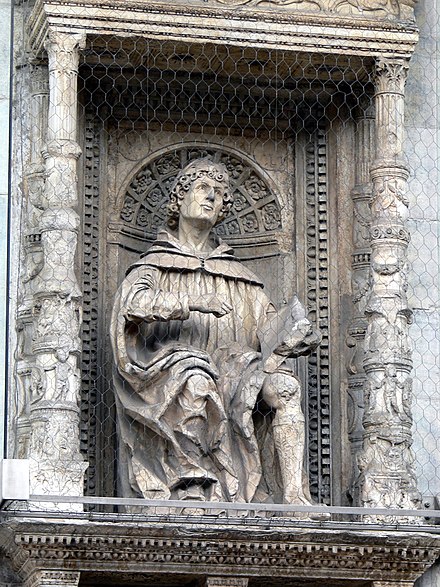 Or did it? Is it better to be dead, or remembered? PtE will stick in my head from here on out, wondering where the line between bravery and foolishness lies.

It might seem that this low theme density would allow Jennifer to inject a lava flow of bonuses into her grid, but having to break up FORTUNE / FAVORS / THE BOLD makes it a tougher task. See how FORTUNE interacts with MOUNT, and THE BOLD with THE ELDER? Those sorts of constraints cut down the potential for added bonuses. Still, with ANIMATRONS, TUNA BURGER, ERASERHEAD, it's a decent result.

AFORE was the only nail sticking out. A shame, since the rest of the puzzle was solid. I bet compressing FORTUNE / FAVORS / THE BOLD — putting them in rows 7, 8, 9 — would have helped smooth things out. This would also have given the quote a better feeling of connectivity, each piece touching the next.

I enjoyed this one much more than typical quote or memorial puzzle (it's the 1940th anniversary of PtE's death?). I've always been interested in myths, tales, the more ancient the better. If there had been more of a full story told — like Jennifer hinted at, dying in a noble attempt to save his friend! — I'd have given this some POW! consideration.

Lovely gridwork. I had a funny feeling something was going on, what with so many Xs popping up during my solve. An even funnier feeling made me worry that these Xs would force an inelegant grid, glopped together with dribs of crossword glue. 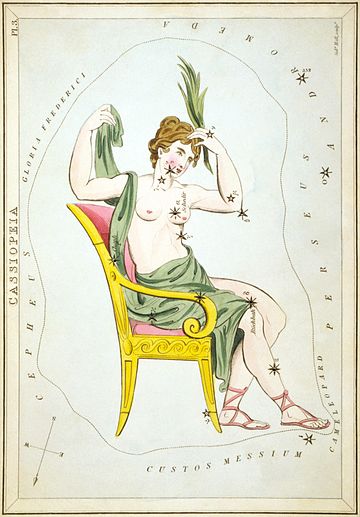 Not so! Such a pleasure to get only a bit of ANO STD. Not a lot of bonuses in just FUSHCIAS and YARDLINE, but for a tricky construction involving five Xs, I'd much rather get a clean 78-word grid than an audacious one showing its strain.

That last paragraph goes to the heart of one of the biggest differences between Jim and me (Jim and a great majority of solvers, probably). As a constructor, I value the technical merits of a puzzle as much as the theme, if not more so. Even if a theme doesn't catch my attention, I enjoy studying the craftsmanship. There's almost always something to appreciate there.

Can you tell I used to love "This Old House"?

It's a fun theme, connecting the Xs to form the constellation CASSIOPEIA. I thought Jennifer did a nice job of replicating the pattern as seen in the night sky. However, my long memory quickly recalled a brilliant BIG DIPPER puzzle, with a much more familiar image. I vaguely knew CASSIOPEIA was a constellation, but as to what it looks like ... good thing we have Wikipedia!

The theme didn't hit me that strongly, especially since we just had the other BIG DIPPER puzzle Jennifer mentioned. But I appreciated the stellar (ha) execution.

I enjoy seeing how different constructors approach a similar idea, appreciating how the same seed of an idea sprouts into two different grids. I did this same concept for CrosSynergy back in 2015. It wasn't a surprise to me that Jennifer used mostly the same themers — I remember the search space not being very big, and only a select few phrases being snazzy, like LIQUOR CABINET.

I liked Jennifer's revealer, KILLER WHALE, better than my oblique one (a POD of orcas). I used POD because I wanted to prioritize smooth and colorful fill rather than pack in too many themers, at the risk of straining the grid. But KILLER WHALE is a more direct revealer, making the concept very apparent, a good thing in general for newer Monday solvers.

Jennifer packed in a whole lot more themers than me, and still managed to make the grid colorful. MS DEGREE, CODEWORDS, RACETRACK crossing DERBY — that's a lot of great bonuses, especially considering that it's hard to work in ANY bonuses when you have six themers to work around.

She did have to pay some prices, though. The top of the grid was so smooth, but then I hit NGO (non-governmental organization). I've wondered if educated solvers should be expected to know this? And then the bottom of the grid suffered more, with ALEE, AGUE, and BIER.

These weren't surprising to me — look how many answers have to work through that white space between LIQUOR CABINET and KILLER WHALE, after all. But BIER or AGUE alone might be a turn-off for some newer solvers, reinforcing the idea that you need to know weird trivia to do crosswords.

All in all, I liked Jennifer's execution. I think I would have given it the POW! if those pesky gluey bits had been cleaned up, even if that came at the price of one of the themers, or some of the juicy bonus entries. I know I'm awfully tough on Monday crosswords, but it's so important for them to be welcoming to newer solvers.

I NAILED IT is a great phrase, lively and colorful. Here, it's loosely interpreted to describe the process of manicuring one's nails: CLIP, FILE, BUFF, SHINE, POLISH. At first I thought it was a "words that can follow X" type theme, since my manicure process involves just CLIP (wouldn't that be quite the boring two-entry theme!). Took me a second glance to see that a full process was happening here. Much more interesting!

Impressive to pack six themers into a Monday puzzle. It's usually difficult to place two themers over each other, as with VIDEO CLIP and CIRCULAR FILE, instead of staggering them left to right. So many down answers run down through both VIDEO CLIP and CIRCULAR FILE! There is some flexibility, as VIDEO CLIP could just have easily been AUDIO CLIP, MONEY CLIP, MOVIE CLIP, etc. — I wonder if one of those could have made for a smoother start than OBI ALAR PRIER SEP in that corner.

Still, given that the BUFF and SHINE and POLISH steps are necessary in the manicuring process (there's really a difference? he asked semi-facetiously), the fact that there are six themers will nearly always force some of those gluey bits. I was bracing myself for more to rear their heads after that start, but the rest of the puzzle is quite well executed. Very smooth; much appreciated.

I wasn't convinced that SOCIAL POLISH and TRAIN BUFF are in the language (less than 50K Google hits each), but they are self-explanatory. Easy enough to grok, even for Monday solvers (and I'm sure there will be some people wearing engineer hats blowing their train whistles in celebration).

Overall, the revealer didn't quite work for me, as it's a bit too oblique a connection between NAILS and NAILED IT, but it is a fun repurposing of language. And working in BABYLON and its Hanging Gardens is a nice addition to an already theme-packed puzzle.